Press Release from DreamSports Media regarding DreamSports.tv© and CHIO Aachen 2016

Join us online as the worlds best riders are competing. We will be broadcasting live from the absolute top events during the CHIO Aachen, the world’s biggest equestrian event. Sweden is the partner country of CHIO Aachen 2016, and dreamsports.tv, are inviting all Swedish, Danish and Norwegian equestrian enthusiasts to join us online. Watch as the worlds best show jumping riders, eventers and dressage riders are rehearsing their Olympic Games performances one last time before Rio. It’s free to watch – but please notice that the signal will not be available in Germany. 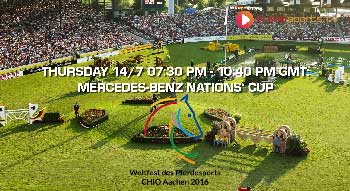 THURSDAY, JULY 14TH 07:30 PM – 10:40 PM GMT: MERCEDES-BENZ NATIONS‘ CUP
Top excitement is promised in the Nations Cup Jumping competition with two (identical) rounds under floodlight. All teams start in both rounds with their (3 to) 4 riders, provided a team is not eliminated in the first round. The best three results of each team are counted for each round. The team with the least number of penalty points after both rounds wins. In case of equality of penalties after the second round, a jump-off will be decisive; one rider per team will compete in the jump-off. 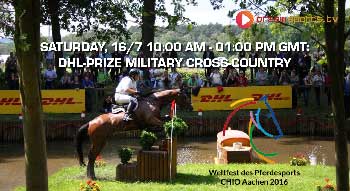 The cross-country track is 4,000 metres long and leads through the meadows of the Aachen Soers, directly next to the CHIO show grounds. The competition’s start takes place in the Soers meadows, the finishing line is located inside the CHIO’s Main Stadium. In Aachen the cross-country will bring the eventing discipline to a spectacular close … 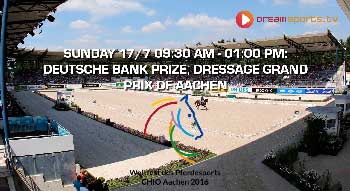 Grand Prix Freestyle, dressage performed to music. This is the final showdown before the Olympics in August , and for many teams the last chance to check their freestyle performances before Rio.

Join us online: dreamsports.tv and The Equestrian Channel – it’s for free! See the broadcast programme

Download the dreamsports.tv App – all the action on your mobile phone and tablet

CHIO 2016 the Equestrian Party has begun!
Scroll to top